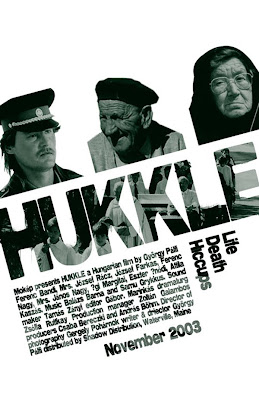 I've been reading a lot of critics lists recently and feeling abit overwhelmed. I've spent much of the past ten years taking in foriegn films. I'd be confident in saying it's nearly half of what I've watched which is no small sum. Come to find out, according to most international critics, I've somehow missed nearly all the best foreign films of the decade. I've more or less decided to try and become aquainted with much of what I've missed, which include the entire careers of a girl named Claire Denis and a guy named Apichatpong Weerasethakul, by many critics measure the best it had to offer. The first of these favorited flicks I've been able to find is a beautiful Hungarian thing called Hukkle.

With an extremely slight narrative and hardly a word of dialogue, Hukkle comes off as more a poem than a drama. The filming takes place in a small hungarian farming town, and captures in many ways the sublime banality of its inhabitants and the local wild-life. The camera wanders from scene to scene through odd and suprising little vignettes, visual analogies, and unimportant coincidences. The closest comparison that comes to mind is Harmony Korine's Gummo. Both take a similar approach employing local non-professionals to go through familiar ritual as the camera catches as best in can its own unique perspective. In Gummo the community seems to be decaying, there seems to be something sinister in each dying tree. It's a distinctly American poem.

Hukkle on the other hand takes place in a far quianter setting. The little village seems as if it's been there for a thousand years and will stand a thousand more. Everything seems healthy and utopian in a way that only little european towns can. Except people are dying unnaturally. A(the) local police officer is trying hard to figure it out, but is left just as baffled and we are. Those few sentences pretty much make up the "plot" of the film.
Resting upon this slender frame are poetic moments of death and rebirth somehow given both the reverence of a nature documentary and sly elements of comedy. A cat which seems to be rolling about playfully in the grass is actually dying in fits. A pig with comically large testicles is walked across town to be bred with a sow, the owners looking on together fondly. A frog sneaking up on a creek side investigation is suddenly devoured by a catfish. And throughout it all an old man seems to have an extreme case of the hiccups.
You may follow along with the cop, the films only intellectual element, trying to solve the mystery at hand but the film doesn't cater to this impulse over any other. It's a relief to be offered such engaging audio/visual poems, and not be overburdened with the facts and the circumstances, or with one character's particular emotional point of view. The film knows how generous its being. In one interlude we observe an older woman watching a soap opera. The sounds of the program off camera fill the small room with melodramatic dialogue and a cheesy score. Your happy to be enjoying a film that leaves room for your own experiences and doesn't attempt to cheapen your emotions. In this way, it comes and goes with less form and ego having, like good poetry, said something less direct but more meaningful.
Posted by mike at 3:00 PM No comments: