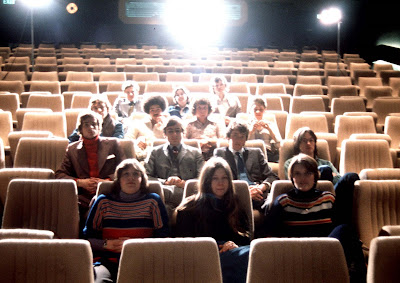 I've just finished watching Michael Apted's series of documentaries entitled The Up Series.
This ongoing series began in 1963 when a group of British 7-year-olds were interviewed on their opinions about love, money, education, and --probably most enlightening---their ambitions. The series featured children from diverse backgrounds, some coming from wealthy families and boarding schools, others from orphanages, or farming communities.

Apted has directed American documentaries and critically acclaimed films, most notably Coal Miners Daughter, Sissy Spacek's portrayal of Loretta Lynn growing up tough in Appalacia or Nell which starred Jodie Foster as a modern feminine version of Tarzan or Jungle Book's Mogli. Why I hadn't heard of this till just recently is beyond me, it's an Ebert top 10 and has apparently been mimicked in several other countries, including the US and was the subject of a Simpsons episode. I imagine the success of the newest pixar film will inadvertently lend it some light.

The idea sort of draws upon an old jesuit saying "give me a child until he is seven and will give you the man", which is sort of ambiguous but, what I think it was intended to mean is that looking at the factors of social class, personality, ambition of a seven year old certain predictions can be made about how they will grow up. Every seven years Apted seeks to find as many of the 14 original participants as possible and checks in on their current lives, ambitions, failures, struggles, achievements. What he achieves are several character studies in the broadest sense, 14 distinctly different biographies that are made even more interesting by the fact that his subjects lead more or less normal everyday lives.

Some of the kids change most drastically from 7 to 14 others from 14 to 21, others and perhaps the most interesting remain in a sort arrested development till well into their 30s. This was the case for one participant Neil who at 7 was intelligent, joyful, and some what naive when asked what he thought about colored people he responded that it was hard to imagine a "purple person with red eyes and yellow feet". He wanted--as many children with strong imaginations -- to be an astronaut. His plan b was to become a coach driver. After seven years there was already definite signs of disillusionment about him and his cheerful demeanor gave way to a more measured, realistic tone. By 21 he was homeless and angry. In his bitterness one could sense a sort of forlornness or existential dread, when coupled with his nervous instability it made him seem hopeless. Over the next 2 series living in extremely modest abodes, hitch-hiking all over Great Britain, and collecting social security his anger begins to give way to tolerance and he becomes more capable of stomaching society eventually moving back to London to pursue politics.

You get a sense with Neil that hes always struggling to bring the truth out, a trait by which in my opinion, he becomes the star of the show. Indeed, the whole cast seem to be collectively bad at self delusion and justifications and most of them allow the cameras back in every seven years. A few though don't which casts a sort of darkness upon their character, perhaps undeserved as they weren't fully capable of agreeing at 7 to do the show in the first place.

Though the show originally intended to make comparisons between classes, colors, and creeds, after the first 2 or 3 the tone becomes more personal than political and takes on a character that that the originators might not have imagined(Apted having been only a researcher, not director of the first installment). The basic questions don't change, class, money, love, work, dreams, but the subject in large part care very little about the politics and desire to talk more about personal goals achievements, children, marriage and so forth.

One conclusion that might be drawn from this, and one that probably my other favorite character Nick comes to at 42 is that the class barriers are so subtle and pervasive that as a fish in water, one cannot see them at work. This could be exemplified by the fact that the privileged seem to be thankful and dutiful, a bit close lipped, and in a couple cases absent altogether. The less fortunate in their turn seem to look at the world as though they were given ample option to do as they pleased and wouldn't want the burden of the privileged.

Nick ,perhaps the most successful and self-made of them all, knew from a very early age he wanted to move from his provincial setting and get on in the world as an important and useful mind. Each installment shows him further actualizing this dream. He moves to the United States in his twenties to pursue a career in teaching nuclear physics whether or not his distance from England harms or helps his opinion is tough to say.

Tony, one of the most interesting, is a hyperactive kid from the wrong side of the tracks who is adamant even at 7 that his dream is to be a jockey. He realizes this dream if only briefly and as it ends he wastes no time moving on to his next choice--cab driver. In one of the series best moments he is asked about dropping out of school...he explains that he only knows a few things "girls, dogs, horses,bets, cars, mom, dad, and love," he fires these out in rapid succession "that's all I care about, that's all I want to care about" simply and genuinely.

The rest of the characters are interesting in their own right, some more than others, but in the end all are indispensable. Watching the series no doubt induced serious self-reflection on my part as I imagine it would have a similar effect on all. In an age where reality television is king and where character driven dramas, no matter how unrealistic and mundane, seem to be as addicting as meth to urban 20-somethings, it baffles me how long this has remained under the collective radar. I still have yet to see the 49 installment and the 56 is set to come out in a couple years. While it may or may not be that genesis of reality television it was/is likely the zenith.
Posted by mike at 12:20 PM No comments:

In addition to the findings of the last post, today I found the following in a book about musical instruments... 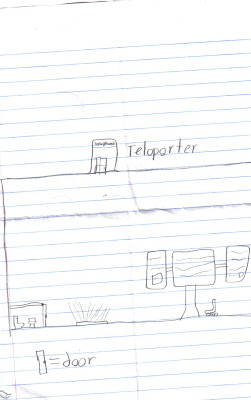 At first I was confused, as I ignored the representations of fixtures and furniture and assumed it was a top side view similar to an architectural blueprint. Upon further study though, it seems the "teloporter" a seemingly ordinary telephone booth is a secret entrance to a high-tech underground lab which has all modern emenities including its own restroom. The teloporter it seems either works by falling toward the floor of the lab aided by an electromagnetic field represent by the lines eminating from the platform which rests directly below it much like your ordinary elevator. Or perhaps more ambitiously, actually tel-o-ports and rematerializes below much like a star trek beam-in, in which case the placing of the fake booth(which may infact actaully send as recieve calls, one hopes this is the case in order to better camoflague its secret purpose)directly above the platform, is a mere coincidence.

In any case the author has provided us with a somewhat limited legend below the treatment, which serves to let us know there is a door to the bathroom as well as a cieling(which lends validity to the thoery that the teloporter drops, without it teloportors could see over the door and into the bathroom ruining the privacy of any mad scientist, henchman, lab assistant, or secret special agent defecting below.

Sadly though the author has misplaced his drawing and will most likley have to settle for throwing his/her self down the laundry chute onto a pile of broken chairs.
Posted by mike at 9:21 PM No comments: 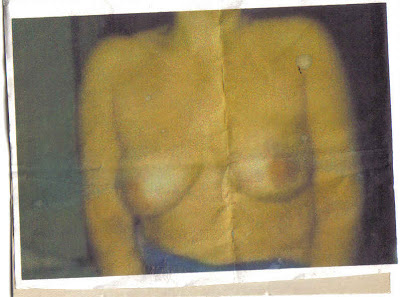 Shuffling books at the library one finds all sorts of things... often items get used as bookmarks and then forgotten between pages, christmas cards, post cards, one book had a used condom wrapper inside...it was that second tier, slightly cheaper name worn by couples who shop for bulk not brand notoriety.

To some people a book drop looks a lot like a trash can. A used tampon applicator can end up resting gracefully atop a copy of the newest Fern Micheals romance novel. Seems it fell out of a plastic bag filled with soda cans and an empty box of nachos...sometimes a girl has to get crafty... 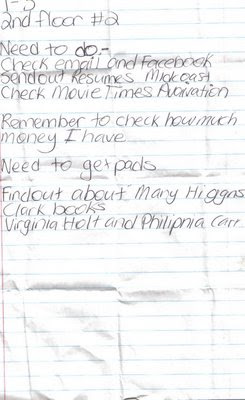 I can't tell if these are in ascending or descending order of importance.


Today I found something a bit more interesting 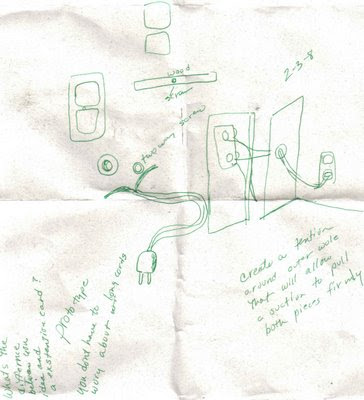 It seems at first to be an idle doodling or an experimental poem,
but a closer look reveals its ambition 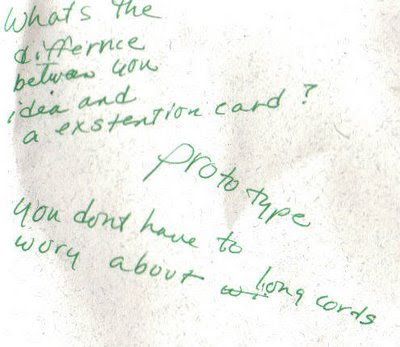 Indeed it is a top secret project...classified level 5 type stuff
the delicate shading of the plug, the expensive resume paper
all hint that this will be something big...so long as it's creator has
internalized his/her patent pending suction/tension pulling mechanism
and can get their hands on a gigantic VHS tape.


If you've relieved yourself in my restroom and weren't keeping a watchful eye on your trajectory
then you may have seen my greatest find (pictured at the top).
I found it some years ago working at an antique mall.
Spraying down the men's room toilets with lysol at the end of the night. I found it folded up, resting atop the tiolet tank in one of the stalls.
It's am ink-jet reproduction of lopsided mams in bad light which someone must have found inspirational to say the least. Luckily I share their appreciation for fine things, and so I framed it in an ornate gold frame and it hangs proudly on my bathroom wall. If you ever go there you may find two handsome gentlemen of leisure with impecible taste... 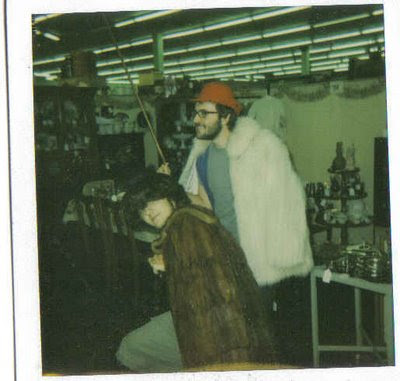 And while were on the subject of all things lost and found. I found this book at the library last week... 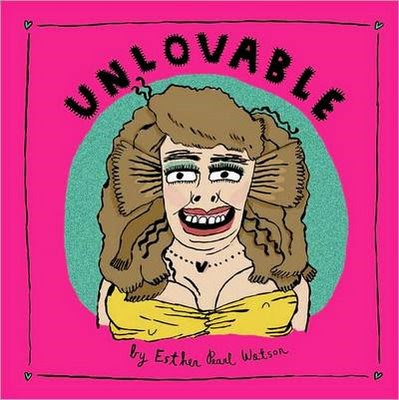 It's a collected serial comic based loosely upon the diary of a high school sophomore in 1985 which was found on the floor of a gas station bathroom.

It is indeed awesome.

Its a time-capsule back to the days of bad hair and false hopes...
of course I mean high-school. 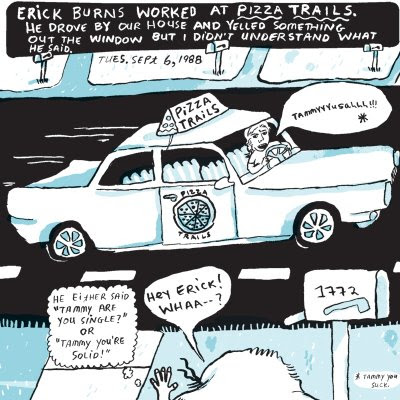 Tammy is the kinda girl that will show you nip for a dollar and then let you keep the dollar.
If you let her hang out with you she'll buy you chili cheese fries from sonic and wait patiently while you make out with your girlfriend. Is it possible that an older Tammy posed for the photo above? Perhaps in exchange for dinner at Chili's or a ride in a PT Cruiser? No, probably not dummy...i just need some sort of call-back so this post can end with a semi-conclusive and quasi-humorous aire.
Posted by mike at 9:25 PM No comments: